I Don’t Know Nothin’ Yet!

Yesterday I wrote about being threescore ten plus six and implied that at such an age one has reached a high-level of maturity.  Today, I’m thinking I don’t know nothin’ yet about a high-level of maturity!  At the age of 76 I wrote yesterday, quoting Antoine de Saint-Exupery, “a man’s age represents a fine cargo of experiences and memories.”  And today I’m thinking that Antoine “don’t know nothin’ yet” either.

I don’t know nothin’ yet compared to Kitty (who bears my surname, but is not my kin).  I met Kitty and her husband fifty years ago!  Today, Kitty is celebrating her 94th birthday.  When I saw her a few months ago, she was still holding her own—opening new doors wherever she could.

The math is simple.  Subtract 76 from 94 and the difference is (rounding off) almost a quarter of a century. (To help you get to where I am this morning, just think about what’s happened in the past 25 years in your own maturing).  No, I don’t know nothin’ yet about old age or maturity.  Unlike Kitty I haven’t experienced the loss of a spouse, for example.  Kitty knows much more than I know now—probably knows much more than I’ll ever know—simply because she is 94 today.

She has always been a quiet and unassuming woman and yet she is as  “sharp as a tack.”  She has been a faithful friend to many, including me.  I’ve always been her admirer.  After the loss of her husband, I’ve watched her growing old without him, with her loving family surrounding her,  and I’ve come to appreciate her spirit more than ever before.  Yes, Kitty is 94 today and since I’m only 76 I have to say, “I don’t know nothin’ yet!”  Happy Birthday, Kitty! 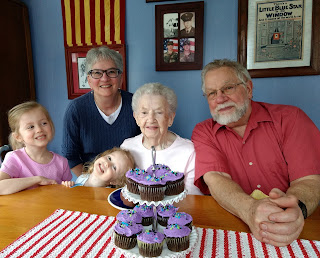