Being a “Great” Grandad

I recently discovered that there are vast differences between being just a Grandad and being a “Great” Grandad.  The first difference is evident by just looking at Great  Grandad now and comparing that present image with a photo of grandad holding his first granddaughter, Katie, 27 years ago.  He is much, much older now and it shows!  He is no longer merely a grandad—he has the looks of a “Great” grandad! In spite of all my “friends” saying that I look just as I did 25 years ago, I know a whopper when I hear one!  Grey hair looks different than brown hair. The ever-growing bald spot on the back of my head speaks of the years that have swept so swiftly by.  The new wrinkles are readily observed and the furrows on my forehead are much more pronounced.

Not only has Grandad changed facially, but his whole body has a new bent to it.  He is 40 pounds heavier now than he was as just a grandad and that sheer weight alone (not counting the years) has caused his shoulders to slump more than they use to slump.  Perhaps the biggest difference is in his inability to get up and get down.  Where once he could swing his grandchildren around in the air,  play “Ring Around the Rosie” and fall down (and be able to get back up again without aid), and chase after those lively grandchildren in a game of tag or hide-and-seek, he can do so no more with his great grandchildren.

As a Grandfather, it was a joy to babysit the grandchildren whenever the opportunity came along.  Now, when grandson Matt (tongue in cheek) suggested just the other day that maybe we could babysit our two great grandchildren sometime, I almost died of fright!  How would I ever manage?

But, lest I discourage those who are, or those expecting to be “Great” grandfathers, let me share a few positive differences.  The first is that your grandchildren probably wouldn’t trust you to babysit your “great grandchildren.”  They take one look at you and know you are not capable any more.  The second is that a visit with the “Great” grandchildren is a leisurely one when compared to those visits of long ago with just grandchildren.  You aren’t expected to swing them around, play Ring Around the Rosie, or chase them, or race with them across the back lawn.  You have now reached a level of “greatness” that doesn’t require any feats of wonder anymore.  You are “Great” just  sitting in a lawn chair and becoming exhausted watching them play.  Why? Because you are their Great Grandad.  They understand that it is about all you can do to push them gently on the swing—or sit across from them and stare at them with wonder and joy!  While the differences between a mere Grandfather and a Great Grandad are immense, the sheer mystery of having grandchildren and great grandchildren is magnified a trillion times a trillion when you become a Great Grandad! 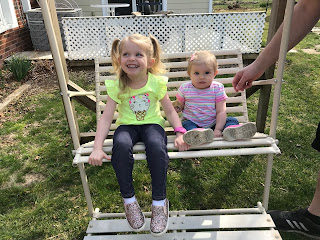