She is YOUNG, only 37 years old and that is a negative in and of itself, especially to the old folk in government.  She is from SOMALIA.  That doesn’t help her any at all either.  (Some tried to label Obama as being born in Kenya—as a put down). Being from Somalia has the same stain as Jesus being from Nazareth had:  “Nothing good can come from Nazareth.”  In today’s world many think “Nothing good can come from Somalia.”  She is a WOMAN.  That’s a strike against her, too.  Misogynists have been around for a long time, especially in our political establishment, and do “their thing” in subtle ways. (ref. Feb. 2015 issue of Psychology Today).  She is an IMMIGRANT.  How have we colored immigrants recently?  They are “bad” people,  we are told, criminals, rapists, drug-dealers.  She is BROWN—a woman of color.  That doesn’t help her either.  She is a REFUGEE.  She spent over four years in a refugee camp in Kenya—(Oh no! Not Kenya again!).  Her family came to the U.S. in 1995 seeking ASYLUM.  How are we viewing asylum seekers today?  The current Administration has implied, in spite of the law, that asylum seekers are somehow illegal immigrants. She is the first SOMALI-AMERICAN, the first NATURALIZED CITIZEN OF AFRICA, the first NON-WHITE WOMAN from Minnesota, and one of the first two MUSLIM WOMEN (along with Rashida Tlaib of Michigan) to serve in Congress.  Yes, Representative Ilhan Omar is a MUSLIM.

Ephebiphobia, Xenophobia, Misogyny, Racism, and Bigotry.  Ilhan Omar says, “I’m as American as everyone else,” but we won’t hear her, we won’t believe her, we won’t even see her for who she is.  We will forever see her the way some IDIOT pictured her on that poster displayed at the State Capital in West Virginia:  “Never Forget”—You Said…” and then below the burning towers,  a picture of Omar and the words:  “I am the proof you have forgotten.”  We won’t hear her anymore, we won’t see her, we won’t accept her now, because the most powerful person in the world has done precisely what the IDIOT in West Virginia did!!  False accusations, gross-distortion of what she has said and who she is, have made her “unhearable” and “unacceptable,” when, in fact, she has something extremely important to say to all of us. But, the President of the United States has decided to do her in:  “Look—she’s been very disrespectful of our country.  She’s been very disrespectful, frankly, to Israel.”  Who's next, I wonder? 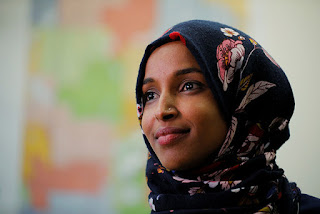