Packing Heat in the Churches

A Virginia State law dating to Colonial days has made it a misdemeanor to “carry any gun, pistol, bowie knife, dagger or other dangerous weapon without good and sufficient reason, to a place of worship” during religious services.  Virginia has a strong gun culture and some rather lax firearm laws, but even so, churches have been gun-free areas, based on this law.  In recent days, however, given the mass shootings in various places of worship around the country (the Sikh temple in Wisconsin, the African Methodist Episcopal church in South Carolina, the Sutherland Baptist church in Texas and the Jewish Synagogue in Pittsburgh), the Virginia Senate began to look more closely at the “without good and sufficient reason” clause in that antiquated law already on the books. A measure that would allow Virginians to legally bring their guns to church came to the floor this past week.  It passed by a 21 to 19 Senate vote.  Every Republican was in favor—every Democrat opposed.  The bill now goes to the Virginia House where a similar measure died in committee last year.

I wonder how such a law (if it becomes a law) might affect the First Amendment freedom of religion clause—given the fact that The Church of Jesus Christ of the Latter-Day Saints and the United Methodist Church have issued statements that guns are inappropriate in their houses of worship.  Leaders of multiple Catholic archdioceses have also spoken out against guns in their churches. On the other hand, many churches across the country have already developed armed security teams made up of lay people committed to protecting the congregation.  These security teams are supposedly trained for their duty to defend and protect.

Those against packing heat in churches say that it creates confusion for law enforcement responding to reports of a shooting and can cause unintentional shootings that go along with guns (in 2017, a man in a Tennessee church accidentally shot himself and his wife during a conversation about church shootings).  Supporters of bearing arms in churches use as evidence an incident in 2007 where a volunteer security team member, shot an armed intruder  at a church in Colorado Springs, who had killed two teenagers in the parking lot.

The issue for me, from a Christian perspective, is what does my faith mean for the life of the world?  Does it mean meting out violence for violence?  Does it mean an eye for an eye and a tooth for a tooth?  Or does it mean a nonviolent approach, an attempt to “Be Not Afraid” and to follow the example of the one I call Master?   I am against packing heat in churches.  I am for  rational gun control.  I can’t imagine a person speaking of loving one’s enemy, loving one’s neighbor, and forgiving those who do all manner of evil against you, holding an assault rifle to make his or her point. 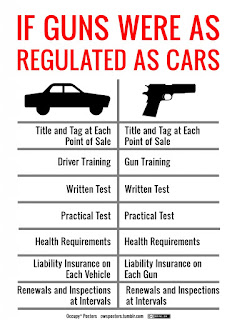