An amazing phenomena happens to students in an Introduction to Psychology class.  The professor’s lectures and the reading of the first few chapters of the textbook cause the student to wonder if he or she might be psychotic, or terribly depressed, or schizophrenic.  This awareness comes because most of the symptoms of psychological illnesses, disorders, and behaviors can be found to some degree in all of us.  Who has not, on some occasion,  experienced some form of paranoia (the unfounded or exaggerated distrust of others, the suspicion that there are some who are out to get us,  or at least plotting against us)?  Students will often say when unsuccessful in a classroom that the teacher doesn’t like them, or an employee having difficulty doing his or her job, may say the supervisor is sabotaging their effort.  Haven’t we all been there and done that occasionally?

In the same way, we have all found ourselves “blind to our own foolishness.”  We typically come to this awareness when we experience other fools “blind to their own foolishness.”  We have all known a situation around the dinner table or at some social event where one person begins spouting off on a topic and says he is correct and that everyone else’s opinion is stupid, uninformed, and wrong.  Everyone listening to him knows that he has no idea what he is talking about, but he goes on and on, totally oblivious to his own ignorance.  I don’t know how my parents put up with my sudden burst of “knowing all” at age 17, or how my colleagues and friends have put up with it through the years.

Charles Darwin wrote in The Descent of Man, “Ignorance more frequently begets confidence than does knowledge.” Psychology has come up with a name for this reality.  It is called the Dunning-Kruger effect and is described as a type of bias in which people believe that they are smarter and more capable than they really are.  Since they do not have the skills needed to recognize their own incompetence, they usually overestimate their own capabilities.

Just the other day a fellow told me that such and such was true because he saw it on TV.  “If it is on TV,” he said, “it has to be true and since I watched the program, I am now an expert on this subject.”  How do you combat ignorance when the ignorant believe themselves to be knowledgeable?  He could not hear me when I tried to say that just because something is on TV doesn’t mean it is true.  Umm…Darwin was right when he suggested that the trouble with ignorance is that it can feel just like expertise. 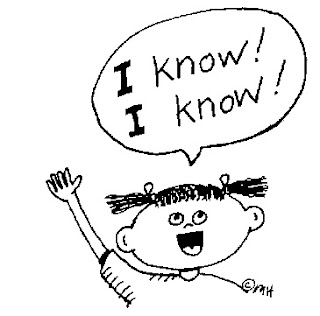