Now we have (since the government shutdown on December 22, 2018) yet another Home Alone movie—Home Alone 5.  The star of the show is 72 year old Donald Trump.  He is finally fulfilling his campaign promise that he “would rarely leave the White House,” even though he spent one-third of his first year in office at one of his own properties (40 days at Bedminster, NJ and 40 days at his Mar-a-Lago resort, etc.).  But, now since Christmas he has been mostly “home alone” according to his own tweets.

Yesterday Mr. Trump said that media reports of chaos and dysfunction within his administration during the longest government shutdown in U.S. history  were “fake news,” because he said, “there’s almost nobody in the W.H. but me.”  Home Alone!  “I just watched a Fake reporter from the Amazon Washington Post,” he tweeted, “say the White House is ‘chaotic, there does not seem to be a strategy for this Shutdown.  There is no plan.’  The Fakes always like talking Chaos, there is NONE.  In fact, there’s almost nobody in the W.H. but me, and…(in yet another tweet) “I do have a plan on the Shutdown. But to understand that plan you would have to understand the fact that I won the election, and I promised safety and security for the American people.  Part of that promise was a Wall at the Southern Board.  Elections have consequences!”  (He forgot in this particular tweet that what he promised was that Mexico would pay for the wall—and he also forgot that Chuck Schumer 10-days before the Shutdown told him, “Elections have consequences, Mr. President,” referring to the 40-seats gained by Democrats in the House of Representatives)

Again, yesterday, Mr. Trump tweeted that he’s at the White House (All Alone) waiting for the Democrats to come back from their “vacations” to work on a deal to end the shutdown, even though he said he “had a plan.”   What’s the plan?  I guess the plan is simply, I’m Home Alone—“I am in the White House waiting for you!” 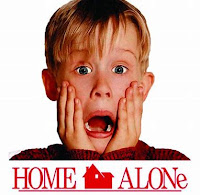