My friend, Vernon, posted a quote from Abraham J. Heschel on FaceBook a few days ago that I felt compelled to repost then and I will do so again in this blog.  Abraham Heschel (1907-1972) was Professor of Jewish Ethics and Mysticism at the Jewish Theological Seminary in New York and author of several books:  Man Is Not Alone, God In Search of Man: A Philosophy of Judaism; and my favorite, The Prophets.

Heschel was arrested by the Gestapo in 1938 Germany and sent to Poland, where he was able, with help, six weeks before the Nazi invasion of Poland to get away to London.  Heschel’s sister Esther was killed in a German bombing.  His mother was murdered by the Nazis, and two other sisters died in Nazi concentration camps. Heschel never returned to Germany, Austria or Poland: “If I should go to Poland or Germany, every stone, every tree would remind me of contempt, hatred, murder, of children killed, of mothers burned alive, of human beings asphyxiated.”  He wrote like a prophet on the frontispiece of his book, The Prophets:

“To the martyrs of 1940-1945—
All this has come upon us,
Though we have not forgotten Thee,
Or been false to Thy covenant.
Our heart has not turned back,
Nor have our steps departed from Thy way…
…for Thy sake we are slain…
Why dost Thou hide Thy face?  (—from Psalm 44).

Heschel said,  “The Prophet is a man who feels fiercely.  God has thrust a burden upon his soul, and he is bowed and stunned at man’s fierce greed.  Frightful is the agony of man; no human voice can convey its full terror.  Prophecy is the voice that God has lent to the silent agony, a voice to the plundered poor, to the profaned riches of the world.  It is a form of living, a crossing point of God and man.  God is raging in the prophet’s words.” 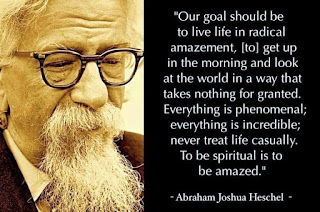