Each Advent for the past several years I’ve shared a story that I’ve titled “Come on In.”  The story is not original with me and I do not know its author or even where I first found it.  If the Quakers have it right, and I believe they do, there is “that of God” in every human being (that includes those on the Right and those on the Left, gay and lesbian, transgender, migrant, feminist, misogynist, black, white, brown and yellow—all humanity).  Whenever, however, and wherever we attempt to shun, discriminate, or denigrate any human person we close the door of our “Inn” to the Marys, Josephs and baby Jesuses of our time.  Here’s the story:

The children’s Christmas pageant was about to begin. All the children had rehearsed their lines and were now dressed in their costumes.  Some were wearing angel costumes with tinseled-edged wings.  Others were dressed up like the wise persons with Burger King crowns and fake beards.  There were also a few bathrobe-clad shepherd types. Mary, Joseph, and the Baby (played by a life-sized rubber ball) were ready for the curtain to rise.

The pageant began.  All went well until Joseph knocked on the door of the inn.  The innkeeper opened the door and Joseph asked, “Do you have any room?”  There was a long silence.  Supposing the little innkeeper to have forgotten his line, the director could be heard whispering a prompt from behind the cardboard scenery.

Suddenly the sad countenance of the child innkeeper turned into a glad grin and he began to speak.  His line came out loud and clear:  “Come on in!  I’ve got plenty of room!”  The pageant ended right there, as the audience stood to their feet with applause and outrageous joy.

Redeemer, come, with us abide;
our hearts to thee we open wide;
let us they inner presence feel;
thy grace and love in us reveal. 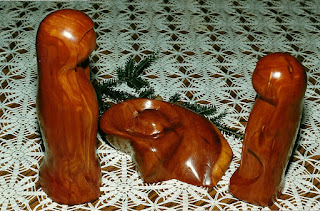