The word vague in this context means “thinking or communicating in an unfocused or imprecise way.”  Synonyms for vague might include, hazy, fuzzy, unclear, blurred, obscure, nebulous, and sketchy.

The word channels in this context means “a way, course, or direction of thought or action.”  Synonyms for channels might include, pathway, gutter, route, artery, canyon, culvert, flume, or even, sewer.

The word Thought is defined as “the action or process of thinking.”  Synonyms for Thought include such words as thinking, contemplation, pondering, rumination, deliberation, meditation, brooding, concentration, reverie or introspection.

Thus, the title of today’s Blog could be phrased in many different ways.  Here are just a few interesting possibilities:

I think any one of these new titles will do, don’t you?  Through vague channels of thought  and our use of words, I wonder this morning if George Gordon Byron has it right.

“But words are things, and a small drop of ink,
Falling, like dew, upon a thought produces 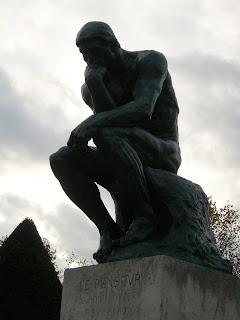