The title character Don Quixote in Cervantes’ 1605 novel is a middle-aged man who, having gone mad from reading too many books about chivalry (the medieval knightly system with its religious, moral, and social code) takes off on an adventure to bring back all the things he thinks (in his demented mind) the world has lost.  He is unable to see the world as it is and his good intentions do only harm to those he encounters along the way.  I suppose one might say that Don Quixote wanted to make his world a better world. This could be me, it could be Mr. Trump, it could be any of us—because I think all of us really do want to have a world and an  America of hope, purpose, beauty and peace, but we only want the kind of world and America that fits our particular perspective.  I suspect, too, that we have all gone a bit mad from either reading too many books, or watching too many movies, or Fox News, or being caught up in too many conspiracy  theories, or being too partisan, or being afraid of too many changes all at once, or being a misogynist, a racist, a homophobic, or whatever else we may be.  Yes, it could very well be that we are all a bit mad (and you can take that word as either meaning “angry” or “insane”).

Most remember Cervantes’ Don Quixote as the fellow who was always “tilting at windmills.” This idiom means attacking imaginary enemies. Don Quixote saw windmills and imagined they were giants and set out to attack and destroy them. Is that what is happening to me?  To you?  Are we tilting at windmills?  Are we jousting with adversaries incorrectly perceived, or taking actions that are based on misinterpreted or misapplied heroic, romantic, or idealistic goals?

We probably all need a sidekick like Sancho Panza who rode alongside Don Quixote on his quest to make a better world. “Do you see over yonder, friend Sancho,” said Don Quixote, “thirty or forty hulking giants?”  Sancho asked, “What giants?”  Quixote responded, “Those you see over there with their long arms.  Some of them have arms well nigh two leagues in length.”  “Take care, sir,” Sancho said, “Those over there are not giants but windmills.  Those things that seem to be their arms are sails which, when they are whirled around by the wind, turn the millstone.”

Some of the windmills now being attacked, some dismantled, because they are perceived as dangerous, or detrimental, or subversive, or whatever are REAL WINDMILLS.  Real windmills turn the millstones that are necessary to life and society as we know it.  When a president attacks the media, or calls other people names, or deregulates certain regulations, he is attacking windmills he perceives as enemies.  Sancho knows the media, people, and regulations are real windmills that turn the millstones that really do make America great. 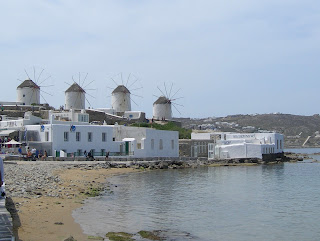