“We live in a mendocracy.  As in: rule by liars.” So wrote Rick Pearlstein in the Daily Beast some years ago, long before the present administration.  “When it becomes ‘uncivil’ to call out liars, lying becomes free.”

Pearlstein wrote, “It takes two things to make a political lie work:  a powerful person or institution willing to utter it, and another set of powerful institutions to amplify it.”  There have always been Kings, corporate executives, politicians from both sides of the aisle to bend the truth when necessary or convenient.  That’s not new.  “What’s new is the way the liars and their enablers now work hand in glove.”

In the Vietnam/Watergate era, the lies of LBJ and Nixon were called out by network news anchors like Walter Cronkite, David Brinkley and others.  Investigative reporters and congressional committees in the mid-70’s revealed that the CIA had secretly assassinated foreign leaders, the FBI had spied on citizens, while Ralph Nader was busy exposing  corporate lies.  American exceptionalism: “The things America did were noble because they were done by America” took a huge hit.  Facts and Truth hurt our American pride, but we preferred facts and truth over the cover-ups and the lies, at least for a little while.

Then Ronald Reagan came along and suggested it was time to stop challenging the powerful.  “A new sort of lie took over: that the villains are not those deceiving the nation , but those exposing the deceit.”  Watergate conspirators “were not criminals at heart.”  Vietnam had been a noble cause.  “America has a genius for great and unselfish deeds.  Into the hands of America, God has placed the destiny of an afflicted mankind.”  It became “unpatriotic” and “uncivil” to call out America’s short-comings, unpatriotic and uncivil to call out the lies of the powerful.

Today we have moved far beyond the Reagan ideology.  What some thought was a mendocracy in that era has become a true reality show in the present administration. 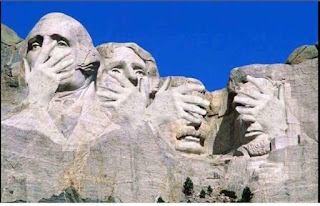