One Half-Penny Out of A Dollar

Many young men (from 1948 to 1973), including myself, enlisted in the military to avoid being drafted at some later and more inconvenient time. In 1973, at the end of the combat operations in Vietnam, the United States ended conscription (the draft) and established a large, professional, all-volunteer military.  This ended our long-standing tradition of the citizen-soldier.  Samuel Adams in 1776 warned of the dangers inherent in this new development:  “A standing Army, however necessary it may be at some times, is always dangerous to the Liberties of the People.  Soldiers are apt to consider themselves as a Body distinct from the rest of the Citizens.”  For two generations, no American has been obligated to join the military (nor coerced to join by the threat of conscription).  Less than 0.5 percent of the population serves in the armed forces today, according to Karl Eikenberry (retired Army general and US commander in Afghanistan from 2005 to 2007).  Eikenberry warns, as did Adams long ago, “Here are the makings of a self-perpetuating military caste, sharply segregated from the larger society and with its enlisted ranks disproportionately recruited from the disadvantaged.  History suggests that such scenarios don’t end well.”

Many Americans are happy to thank volunteer service members for their service, and well they should, for it is the volunteer soldier, sailor, airman, etc. who make it possible for them not to serve (in the military).  Our present all-volunteer force may be the most lethal and professional force in history, but, let me repeat, it represents only 0.5 percent (some round that figure off to 1 percent) of our population.  This means, as Eikenberry suggests, a “sharply segregated”group from the larger society.

We like to divide the world up these days in terms of us vs. them:  the wealthiest one percent and the rest of us—the 99 percent.  We must be extremely careful not to do so with our military members, even though the same division exists:  the military one percent and the rest of us—the 99 percent.   Is it any wonder that Adams suggested years ago “Soldiers are apt to consider themselves as a Body distinct from the rest of the Citizens,” for indeed, they are!  Yet, we must ever be aware (both those in the military and those not in the military) of George Washington’s maxim:  “When we assumed the Soldier, we did not lay aside the Citizen.”  And, as Veteran’s Day approaches we might also say, When we assumed the Citizen, we did not lay aside the Soldier. 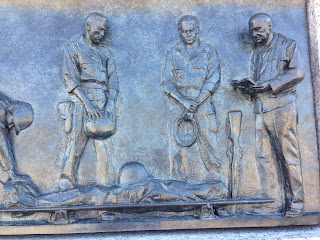