C. S. Lewis wrote the novel, The Great Divorce, back in 1945.  The book was based on a dream in which the author reflects on the Christian conceptions of Heaven and Hell.  In the dream the narrator finds himself in “the grey town”, where it is always raining, even indoors.  It’s a hell of a town—a kind of purgatory.  He finds a bus-stop.  There he waits in line and listens to the arguments among his fellow passengers.  Many of them quit the line in disgust before the bus arrives.  When the bus finally comes there are only a few remaining passengers who board it.  The bus flies upward.  It’s destination:  the foothills of heaven.  If you want to know the rest of the story, you’ll have to read the book for yourself.

The Episcopal Church, the Evangelical Lutheran Churches in America, the Presbyterian Church (USA) and the American Baptist Churches (USA) have already experienced a similar divorce in their “grey towns.”  They, too, argued while waiting in line at the bus-stop, and walked away before the bus arrived.  They argued, as The United Methodist Church has been arguing, over whether or not they should be inclusive of all people, particularly LBGTQ folk and abortion (a woman’s right to choose).  Of course, the divide has been labeled a religious one, but it is also political—liberal verses conservative.

The United Methodist Church has decided it is time for a divorce, thinking this will get everybody out of the rain or out of “the grey town.”  The arguments with one another are so aggravating, so divisive, so intense, that they can’t tolerate waiting in line with each other for the bus. They walk away from one another and thus miss that bus which might take them out of “the grey town,” They want only to associate with like-minded people—people like themselves. They want no Samaritans in their midst, no Romans, no outsiders.

The Church (whatever the name given it) is supposed to be an instrument of the Gospel (not Paul’s Letters or the Old Testament, or by our political bent, but rather by the spirit of Christ).  That Gospel is meant to force us out of our individual bubbles and help us connect across all the social, political and racial barriers of our culture.  It’s the bus we are waiting for…as we sit side by side with those who are different from us in “the grey town”.  But we refuse to wait in line with those who are different.  We reject the Gospel—as people have always done. 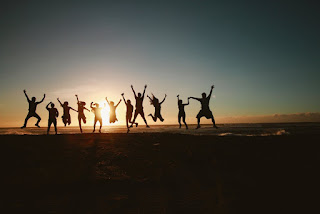